I was talking with a friend the other day who’s in a typical nonprofit situation—a one-person planned giving shop. He’s tasked with not only the important job of traveling and meeting with planned giving prospects and donors to close gifts for his great organization, but also managing the marketing efforts and trying to sort out what’s working and what’s not. Like everyone, he has to report back to his boss and board to ensure they’re being good stewards of their organization’s dollars.

As we were discussing all of the different marketing activities that he juggles, doing some stuff in-house and utilizing a variety of different vendors, I asked him: “What’s working to generate conversations, and what does your ‘follow-up’ strategy look like?”

He shared with me some of the responses from his print and his digital outreach and how he had followed-up to those inquiries. He had a pretty standard approach— he mainly utilized personal letters and phone calls. I then asked if he’s being proactive and reaching out to donors before they reply to gauge interest in what he’s sending out to them.

I know. It sounds a little backwards, but stick with me.

A few years ago, I attended a session at a planned giving conference out East and heard a speaker share the idea of the ‘Tuesday Call.’ The idea is that every Tuesday afternoon 2-3 weeks after one of his mailings dropped, the speaker would block off a couple of hours on his Outlook calendar to call some of the prospects that he had included in his mailing. He approached the call as a simple opportunity to thank them, but then would also use it to ask about his mailing. He would ask if they found it helpful, if they had any questions and if they had any feedback to share.

Like I explained to my friend in the one-person planned giving shop, the ‘Tuesday Call’ isn’t as backwards as it may seem. When you are a one-person shop (or even a few-people shop), it can help save you time and money to learn what your donors find useful before you send out your next mailing.

Take the initiative and when you see opportunities to engage, use them. 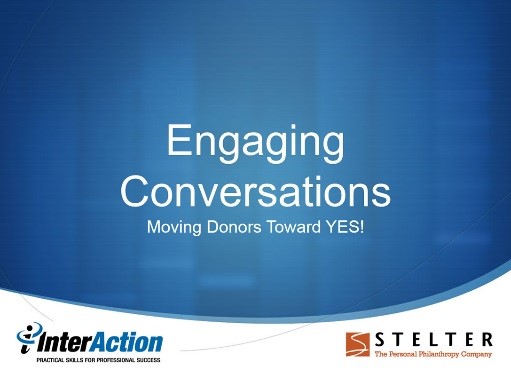 Looking for ideas on how to engage donors? Check out one of our most popular webinars of 2016, “Engaging Conversations: Moving Donors Toward YES!” with Carol Moreland.