We welcome back a special guest on the blog: Stelter’s Senior Gift Planning Consultant, Lynn Gaumer, J.D. Lynn gives us her analysis on Giving USA’s 2019 numbers.

Is Your Glass Half Full or Half Empty?

How Do You Choose to Interpret the Latest Numbers From Giving USA?

Numbers can be interpreted to mean dramatically different things. A good example of this in the planned giving world: the latest numbers from Giving USA.

The new numbers say that after considering individual donations, corporate donations, bequests and foundation giving, Americans gave a record $427.71 billion in 2018 despite a very complex economic and political environment. This equates to more than $1.12 billion per day that is used to improve lives and communities around the world. When combining the individual and bequest numbers, individuals contributed almost 77 percent of all dollars given to charity in 2018. If we include family foundation giving, individual philanthropy accounted for 85.7 percent of all dollars given in 2018.

But when adjusted for inflation, charitable giving fell by 1.7 percent. The decline is not huge, but it is noteworthy. A deeper dive into the numbers is educational.

You can see the numbers with Giving USA’s infographic below. 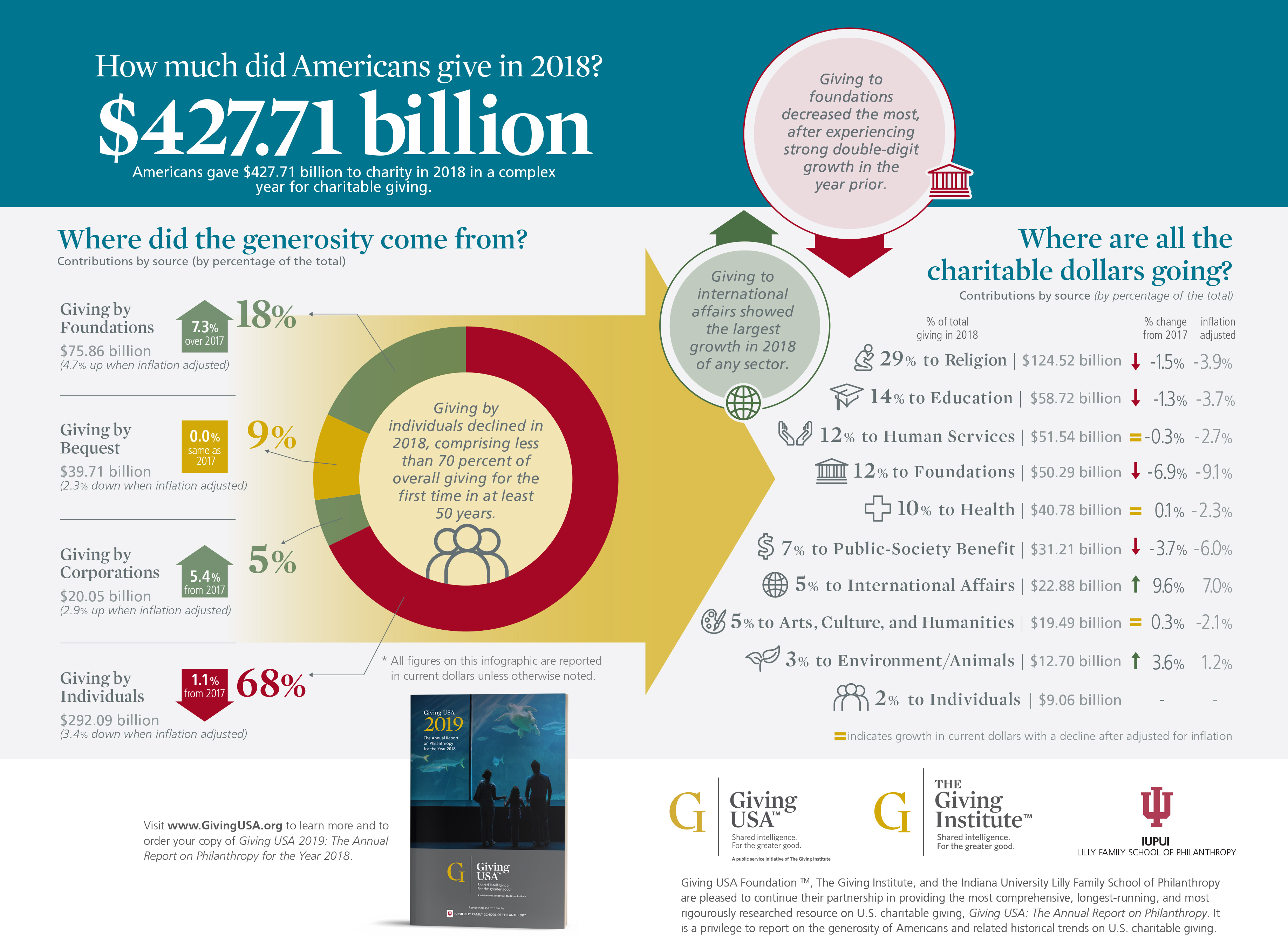 The increased giving by foundations was perhaps due to a robust economic environment and shows a trend that donors are setting aside money to make gifts at a later time.

Bequest giving tends to fluctuate from year to year based on the estates of high-net-worth donors and is less influenced by economic factors. You should continue to promote bequests, as an estimated nine out of 10 planned gifts will be charitable bequests.*

The data seems to show that some corporations decided to pay it forward and increase their corporate giving. Giving by corporations showed significant growth possibly fueled by the Tax Cuts and Jobs Act, which decreased the corporate tax rate from 35 percent to 21 percent. Some of these corporations may have given a one-time boost to the charitable sector after the new tax law went into effect, so it is difficult to tell if this trend will continue in 2019.

A Complex Year in Review

There is no doubt that 2018 was a complicated year. And it is likely a variety of factors influenced charitable giving. Here are a few:

Economy. The economy was relatively strong in 2018, fueled by key economic factors such as an increase disposable personal income and growth in the gross domestic product [GDP]—both of which historically have given a boost to charitable giving. “Typically, individual giving will track with growth of GDP, which was pretty robust in 2018, and with growth in household income, which was also strong,” said Rich Dunham, chair of the Giving USA Foundation.

Stock Market. There was an overall decline in the stock market, with large drops in December when many individuals make or increase their donations.

Tax Law Changes. The standard deduction nearly doubled under the Tax Cuts and Jobs Act. According to the congressional Joint Committee on Taxation, the number of households that itemized their deductions dropped by an estimated 16 million to 20 million in 2018. The numbers seemed to indicate that many mid- to lower-level donors who were focused on the tax deduction either simply didn’t give or gave less in 2018.

Accelerated Giving in 2017. The decline in individual giving in 2018 may be due, in part, to the fact that many individuals accelerated their 2018 giving at the end of 2017 in anticipation of tax reform. According to Dr. Patrick Rooney, executive associate dean for academic programs at the Lilly Family School of Philanthropy, “Some people bundled more than their usual amount into charity gifts before the end of 2017 to avoid any real or feared negative tax consequences. In turn, that may have suppressed the dollars donated in 2018.”

I believe many Americans have not fully grasped how the tax changes would affect their charitable giving before filing their taxes in 2018. Therefore, they may decide to make some changes in 2019 and beyond, such as focusing on lifetime gifts for income-tax-planning purposes, bunching gifts and qualified charitable distributions.

A strong economic climate helped motivate giving in 2018. This trend may continue into 2019. As a result, make sure you are promoting gifts of appreciated assets—such as gifts of securities and real estate—in your marketing materials.

The Giving USA data shows that the share of Americans giving to charity has decreased steadily over the last two decades, but that does not mean they are not charitable. Many are giving to donor advised funds instead of directly to charities. Fidelity Charitable, the nation’s largest nonprofit, released its 2019 Giving Report. It made $5.2 billion in donor-recommended grants in 2018, a 17 percent increase from the previous year. Make sure you are promoting donor advised funds across all of your marketing channels.

How Do I Choose to Interpret the Most Recent Data? My Glass Is Half Full

I chose to look at the most recent Giving USA numbers in a positive light. Charitable giving reached a record $427.71 billion in 2018. Even when adjusted for inflation, that’s the second-highest level in history. Given the political and economic complexity of 2018, I take that as a win for the philanthropic community. “Despite declines in 2018, many subsectors experienced their second-best year for giving ever, when adjusting for inflation,” said Laura MacDonald, vice chair of Giving USA Foundation and founder of Benefactor Group.

With that being said, I think there is a lot to learn from Giving USA’s report. Your organization must keep informed with the latest legislation and research and continue to evolve with the changing environment. Review your planned giving fundraising efforts to make sure you reach your donors in the most effective way.

Let’s make sure the latest Giving USA numbers are not the start of a downward trend for charitable giving. The Charitable Giving Tax Deduction Act is designed to protect taxpayers and encourage charitable giving. The bipartisan bill would make charitable tax deductions universal and “above the line,” allowing all taxpayers the option to write off charitable donations on their taxes whether or not they itemize, providing maximum relief for those who donate to tax-exempt charitable organizations. Contact your congressional leaders to encourage support of this bill.

These Giving USA 2019 numbers show that planned giving is a critical component of your fundraising efforts. If your organization does not have a planned giving program, use this latest data to garner support from your board of directors. If you are in the process of growing your planned giving program, contact Stelter to learn how you can better engage and inspire your donors to support your mission.

Want to Stand Out?