Giving USA released its 2020 annual report last week, but it just felt, well, different. Perhaps you may even feel that it is irrelevant. So much has changed in the first six months of 2020. Let’s take a brief look into the numbers and, more importantly, let’s look ahead to see how Americans are responding and giving this year.

The new numbers say that after considering individual donations, corporate donations, bequests and foundation giving, Americans gave a record $449.64 billion in 2019. This equates to more than $1.23 billion per day that is used to improve lives and communities around the world. When combining the individual and bequest numbers, individuals contributed about 79% of all dollars given to charity in 2019. These are key numbers to use when trying to make your case to expand your planned giving program.

Nine of the 10 charitable sections saw growth in 2019. Education; public-society benefit; arts, culture, and humanities; and environment/animals organizations saw double-digit growth. This has been critical to helping sustain many of these organizations this year.

Bequest giving was flat last year. The amount tends to fluctuate from year to year based on the estates of high-net-worth donors and is less influenced by economic factors. You should continue to promote bequests, as they continue to provide a solid foundation of any planned giving program. In addition, many of your donors are staying home and going digital with their estate planning. Google Trends shows a significant increase in online searches for estate planning terms. This reinforces the need for continued stewardship and staying top of mind with your donors.

You can see the numbers with our infographic below. 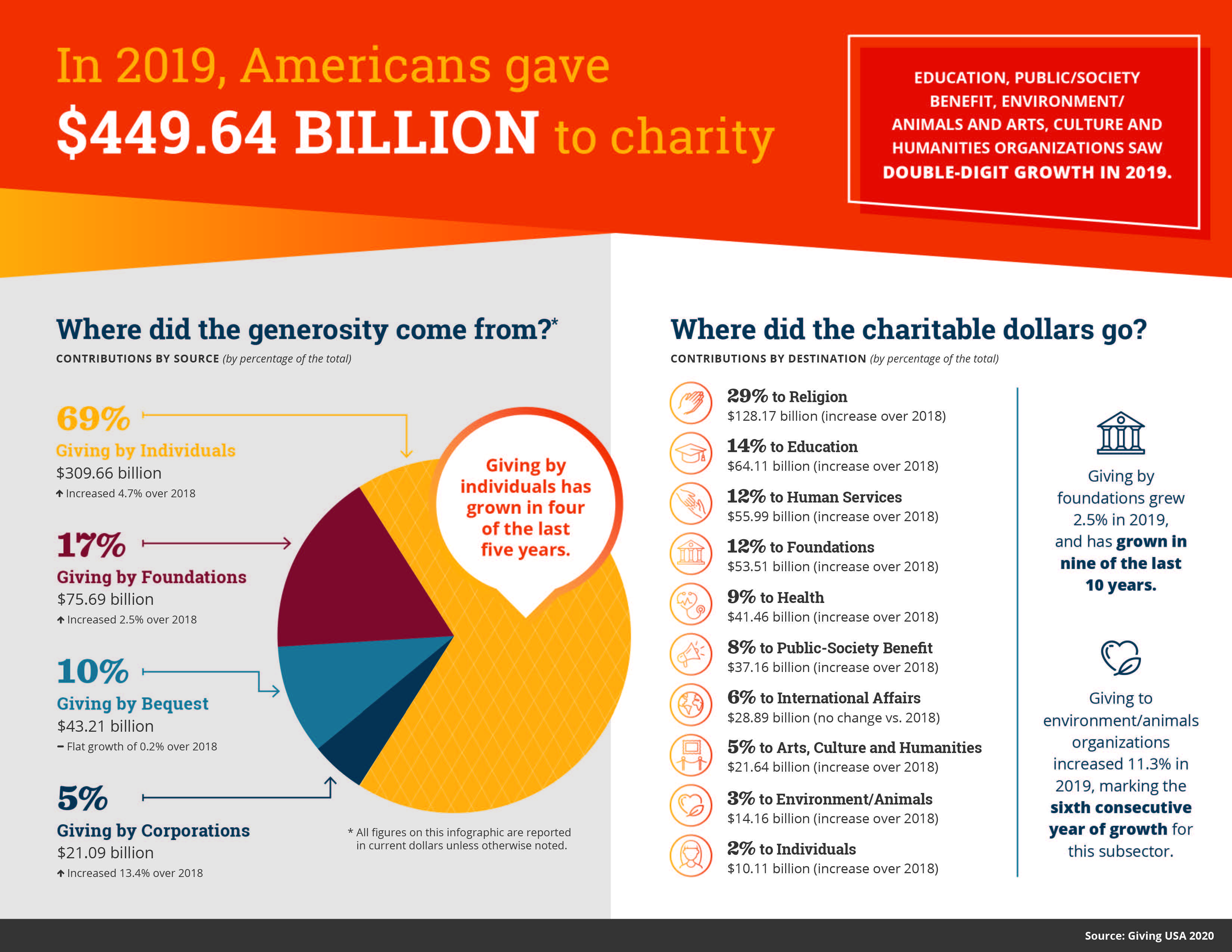 History Will Repeat Itself, as Individuals Continue Their Charitable Support in 2020

In just the first six months of the year, we have been faced with a global health pandemic, an economic downturn and a nationwide reflection on racial inequality. How will individuals respond? Like they always have. We can use history as our guide. Even in the wake of 9/11 and the Great Recession, individuals continued to give. Even when Americans face collective adversity, we’ve seen time and time again that we unite and rise to the occasion to help those most impacted. Let’s take a brief look at some of the ways people are responding this year.

The CARES Act. One of the earliest responses to COVID-19 and the economic downturn came when Congress recognized the critical work of nonprofits. The CARES Act was created, in part, to spur cash donations to nonprofits by implementing a new universal charitable deduction and increasing the adjusted gross income limit to 100% for cash gifts to qualified charities. According to the Fundraising Effectiveness Project, which is managed by the Association of Fundraising Professionals, donations under $250 rose almost 6% in the first quarter. The new $300 universal charitable deduction, which was signed into law on March 27, may help increase this percentage during the last three quarters of the year.

Giving Tuesday Now. An offshoot of the annual charitable giving event that happens the Tuesday after Thanksgiving, #GivingTuesdayNow was created in a relatively short period of time in response to the pandemic.

Millions of people worldwide came together on May 5 and expressed their generosity in a variety of ways including acts of kindness; donations of goods, time and money; notes of compassion; advocacy for causes; and care for family and friends. An estimated $503 million was donated online to charities on this single day of giving.

Corporate Giving. Recent data shows that some corporations decided to pay it forward and respond to various causes. Walmart, for example, recently announced a five-year, $100 million cash commitment to fight systemic racism. Target announced a $10 million commitment in an effort to advance social justice through supporting partners such as the National Urban League and the African American Leadership Forum. PayPal pledged $530 million to support Black- and minority-owned businesses. Bank of America pledged $100 million “to support critical needs of local communities as a result of the coronavirus.”

Change and Advocacy. Watch just about any news channel or social media outlet and you’ll see speakers and protests on racial injustice. Even in the midst of a pandemic and economic downturn, individuals are giving to causes they care about. Black Lives Matters recently established a $12 million fund to help organizations fight institutional racism. ActBlue, the leading site to process online donations for Democratic causes and campaigns, raised $41 million in 24 hours on June 2, also known as Blackout Tuesday, to help with racial injustice. According to a recent New York Times article, “progressive and racial justice groups have seen a cascade of donations since George Floyd’s death and the ensuing protests. Bail funds alone have received $90 million.”

As fundraisers, let’s do our part. The Universal Giving Pandemic Response Act was introduced this week in the U.S. Senate and would expand the limited one-year $300 universal charitable deduction under the CARES Act to one-third of the standard deduction or $4,026 for individuals and $8,052 for married couples. The bipartisan bill needs your support. Contact your congressional representatives to encourage expanding the universal charitable deduction.

MAKE THE MOST OF THE SECOND HALF OF 2020

Use the Giving USA numbers to show that planned giving is a critical component of your fundraising efforts. Whatever charitable sector you are in, individuals are continuing to give to support the causes that matter most to them. The need for a solid planned giving program is more important than ever. Use this latest data to garner support from your board of directors to grow your program even during these unprecedented times.

Continue to be top of mind with your donors. Stelter’s recent webinars and blogs offer a wide variety of resources to help you navigate the second half of this year. Plus, check out our recent whitepaper, A Short-Term Guide for Marketing Planned Giving: A Plan for the Next 90 Days.

WANT TO STAND OUT?